Twenty years ago, lounging became fashion, yet the most stylish seats were designed more than six decades ago. From the Egg Chair to the Ribbon Chair; these iconic lounge chairs are more than chairs with a footstool where you can sit comfortably. All of them are eye-catchers. Some have been designed as a luxury object in the living room or office, others to isolate from the hectic world in public spaces. But all of these lounge chairs have one thing in common; a pleasure to watch.

In the mid-fifties the American couple Charles and Ray Eames wanted to design a luxurious and modern relax chair. They had a stylish piece of furniture in mind, with the comfort of a worn baseball glove in which you can snuggle up with a cup of coffee or a well-earned drink. Or relax in, like film producer Julian Blaustein did when he came to his office at the invitation of Charles Eames to read scripts in a test chair. Blaustein was embarrassed when he awoke, but for Eames, Blaustein’s nap was proof that they had designed the ultimate recliner.

In 1956, the Eames Lounge Chair was first shown on the American TV channel NBC at the Arlene Francis Home show. It soon found his way to the living rooms and became immensely popular. And it found its way to the filmset as it can be seen in “Iron man” and “Frasier”.

Unfortunately, the popularity also led the chair has been copied from the start. Copies come from America, Europe and nowadays also China. The original Lounge Chairs are produced by Herman Miller and Vitra (Vitra for the European market and the Middle East).

The chair consists of three multiplex dishes with a veneer layer and at the top soft leather cushions. Charles and Ray Eames have been experimenting since the Second World War with the formation of thin glued layers of wood. They were pioneers and experts in this technology. In the original design, they used rosewood for the outer layer of veneer. After the ban on the use of Brazilian rosewood, cherry, nut or sustainably grown wood (which has the same structure as rosewood) is used as a finish.

The Eames Lounge Chair has become a true status symbol, which does exactly what Ray and Charles Eames designed the chair for, namely comfort and allowing you to enjoy a moment of peace.

For the Spanish king and queen, who visited the World Exhibition in Barcelona in 1929, architect / designer Ludwig Mies van der Rohe and Lilly Reich designed a chair for the couple to rest in the German pavilion. However, whether they have ever sat on it is the question.

Determined to design a modern royal chair, Mies van der Rohe was inspired for the Barcelona Chair by the Curule chair from Roman times. This place of honor is characterized by the cross-shaped legs, at that time this distinctive sign could only be used by the Roman aristocracy.

Almost 25 years later, in 1953, the Barcelona Chair was taken into production by Knoll International. Florence Knoll and Mies van der Rohe were close friends. The chair is handmade from 40 pieces of leather from one cowhide. The cushions are supported by saddle leather webbing (made from the thickest parts of the skin) and the frame is made of shiny stainless steel.

Now, ninety years later, the Barcelona Chair is still modern and was even used in a science fiction film that takes place in the cyber world; the film “Tron: Legacy”.

Fascinated and inspired by the simple and timeless design of the frame of a bicycle, Marcel Breuer designed this special chair. The Wassily Chair, not designed by, but named after painter Wassily Kandinsky, is made of bent tubes with different widths fabric bands in between.

Kandinsky saw the Model B3 chair, as it was originally called, in Breuer’s studio and was so charmed by it that he wanted it in front of his office. Breuer and Kandinsky, like Mies van der Rohe of the Barcelona Chair, worked at Bauhaus (a German pre-war art school that combined crafts and the fine arts, which evaluated itself as a concept of culture).

The first versions of the chair were made by the manufacturer Thonet under the original name Model B3. The chair was available in two versions; a foldable and a non-foldable version. The versions produced by Thonet are very rare; the Model B3 went out of production during the second world war.

After the war, the manufacturer Gavina saw the potential of the chair, which was then given the more commercial name of Wassily Chair. Gavina also introduced a variant with leather straps. In 1968 the company was taken over by Knoll International, which also produces the Barcelona Chair. The patent has since expired, as a result of which the Model B3 is being offered by various suppliers worldwide. Knoll still has the rights to use the name Wassily Chair.

The Egg Chair is minimalistic and in perfect proportion; Scandinavian design with sharp, round lines, the design of which was perfected in clay by designer Arne Jacobsen. Due to the round egg shape, the chair offers security and privacy, so that the person sitting in it can isolate himself from the noise and hectic of a public space.

Jacobsen designed the Egg Chair together with the Swan Chair in 1958 for the SAS Royal Hotel in Copenhagen, of which he himself was the architect.

The shell of the Egg Chair is made of sturdy foam that is covered with fabric or leather, the tilting frame is made of aluminum. The chair is mainly used in (large) public spaces, but in combination with (or without) the footstool is also very suitable for the modern living room.

The Egg Chair is produced by Fritz Hansen, who has many collaborations with well-known Danish designers, including Poul Kjaerholm, known for the PK series.

The design of the Coconut Chair is typically 1950s: humorous, minimalist and unconventional, but usable.

The Coconut Chair owes its name to the shape of the shell, which looks like the eighth part of a coconut with reversed colors. The seat can have various colors. The special shape of the chair gives the user the freedom to sit in his own favorite way. Although the credits of the design of the Coconut Chair always go to George Nelson, it is well known that he made the design in 1955 in collaboration with designer George Mulhauser.

The first Coconut Chairs were made of curved steel with a thick layer of foam rubber covered with fabric or artificial leather. The steel has been replaced in the course of time by fiberglass-reinforced plastic. The shell thus became seamless, which further contributed to the sleek design. Today, the upholstery of the Coconut Chair is also available in leather.

Just like the Eames Lounge Chair, the Egg Chair is made by both Herman Miller and Vitra. Both companies have their own sales area, which means that the Herman Miller version is no longer available in Europe and the Middle East.

The French designer Pierre Paulin was a trained sculptor, which is clearly reflected in the design of the Ribbon Chair from 1966. He made the chair in the years that he worked for the Dutch company Artifort. His best-known designs also include the Orange Slice Chair, Mushroom Chair and Tongue Chair.

The Ribbon Chair is an artistic, futuristic object that attracts attention in every room. The organic forms of the armrest and backrest merge into one another and form a whole to come together in the wooden base. In 1969 Paulin received the American Industrial Design Award for his design.

Some of the most fantastic beautiful designs are stunning, but unfortunately they are mainly to look at because it is simply not comfortable. This is absolutely not true for the Ribbon Chair, the chair is also super comfortable. A matching Ottoman is available for the complete lounge effect.

Under the elastic fabric of the Ribbon A metal tube frame is hidden with horizontal springs and molded foam. The fabric can be produced in many different colors and designs, a completely green version can be viewed at the National Gallery of Victoria in Melbourne.

The Ribbon chair is manufactured by Artifort, a Dutch furniture manufacturer also collaborate with international designers like Rene Holten and Geoffrey Harcourt. 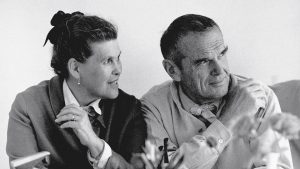 This week, architects and design enthusiasts will have a great time in Rotterdam, where the Design District trade fair will be held from 5 to 7 June.

Twenty years ago, lounging became fashion, yet the most stylish seats were designed more than six decades ago. From the Egg Chair to the Ribbon 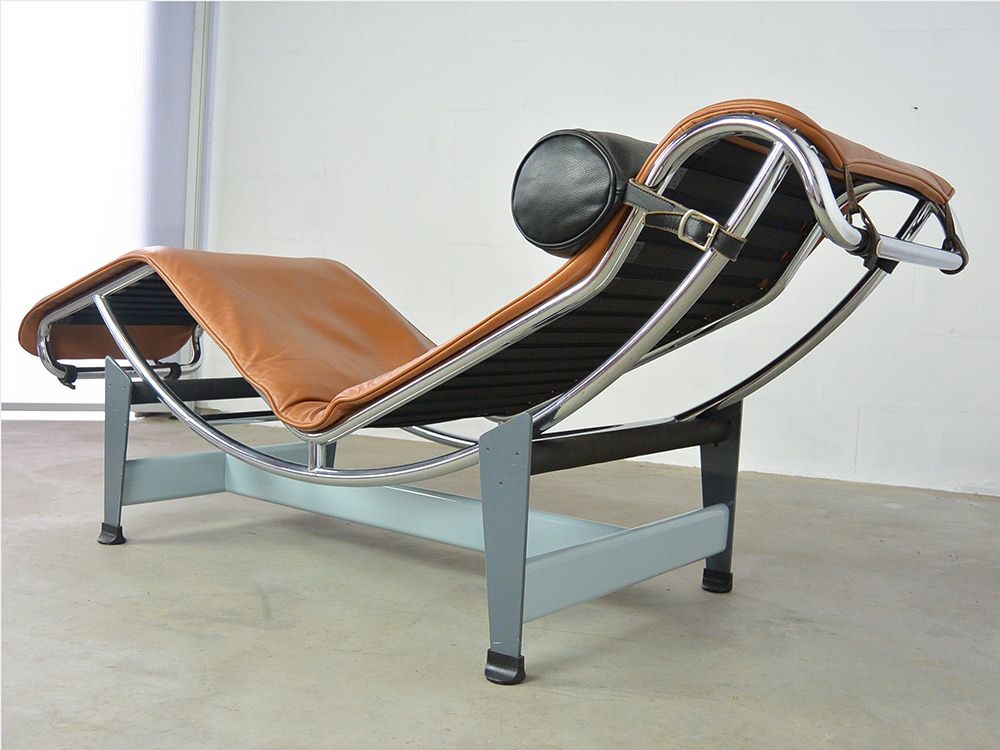 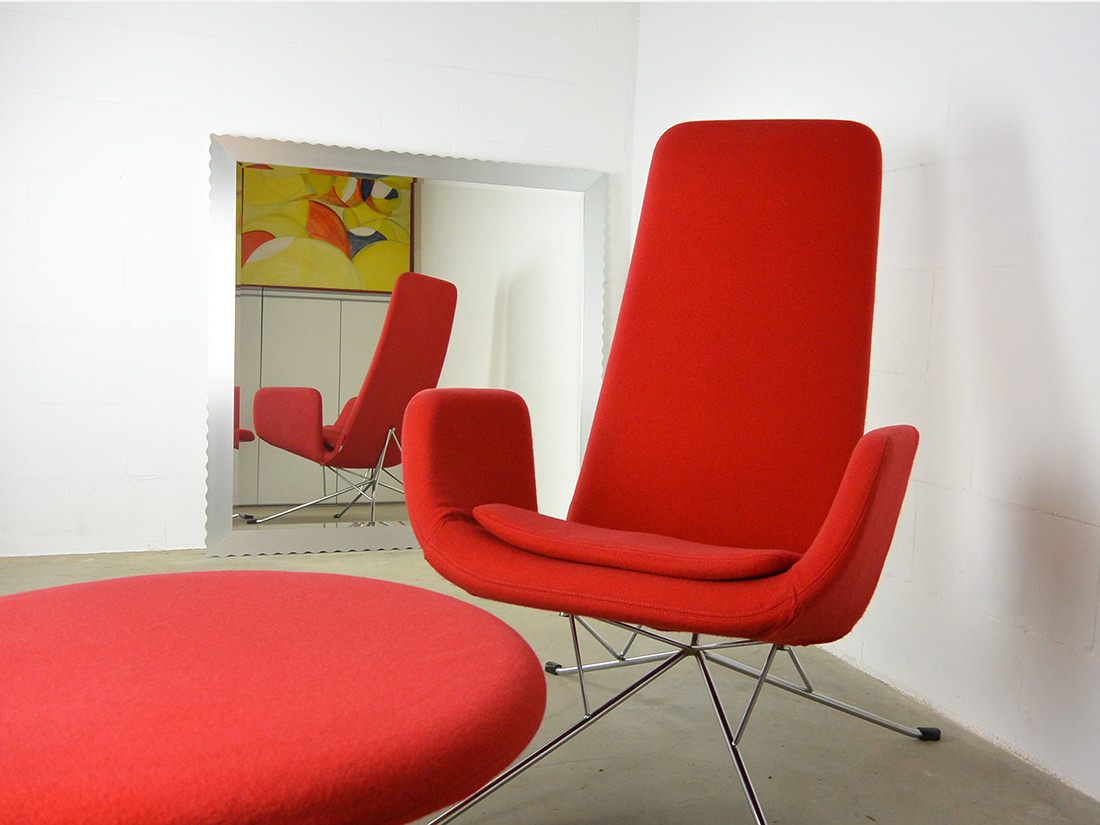 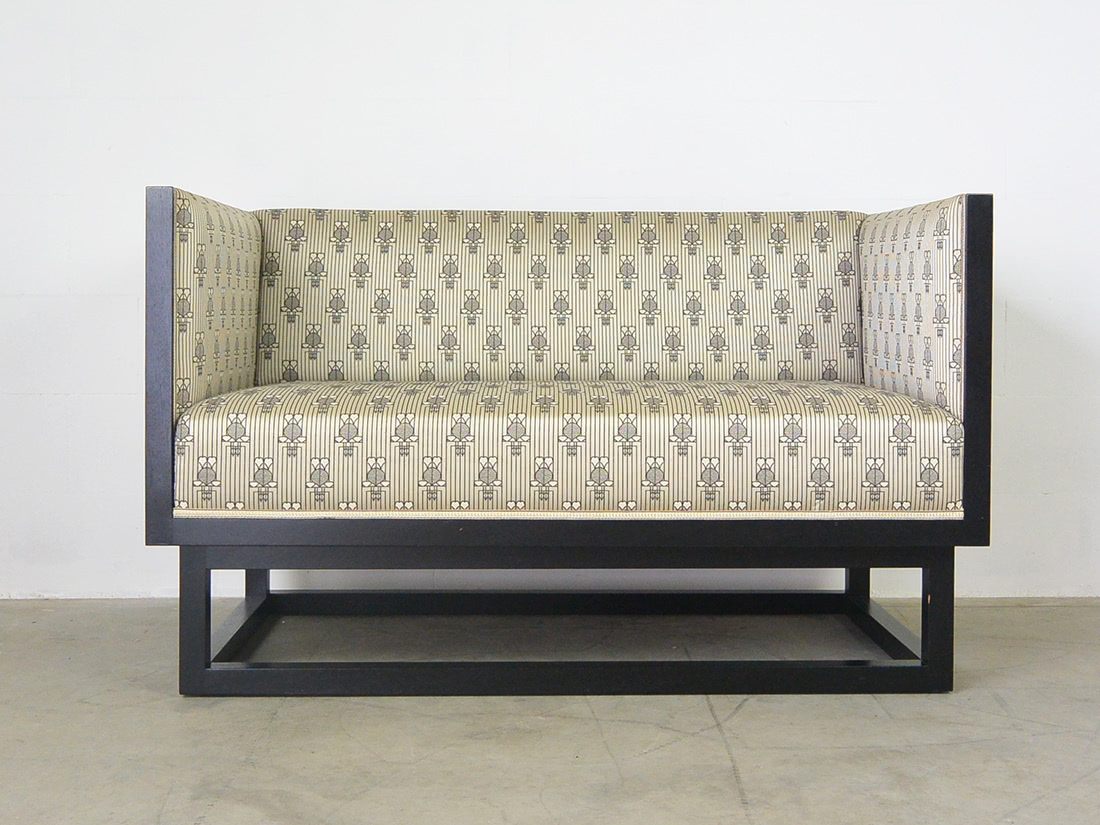 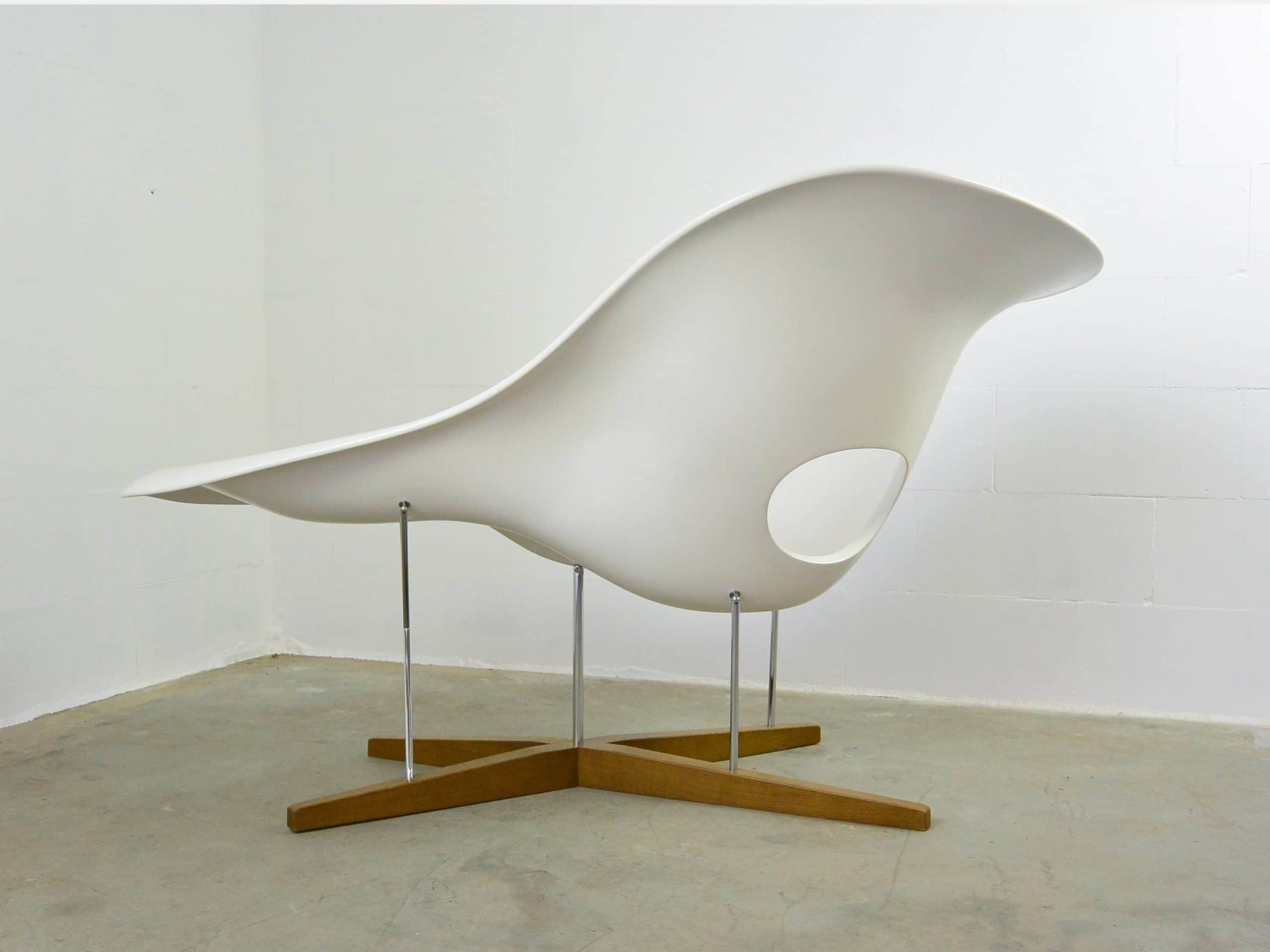 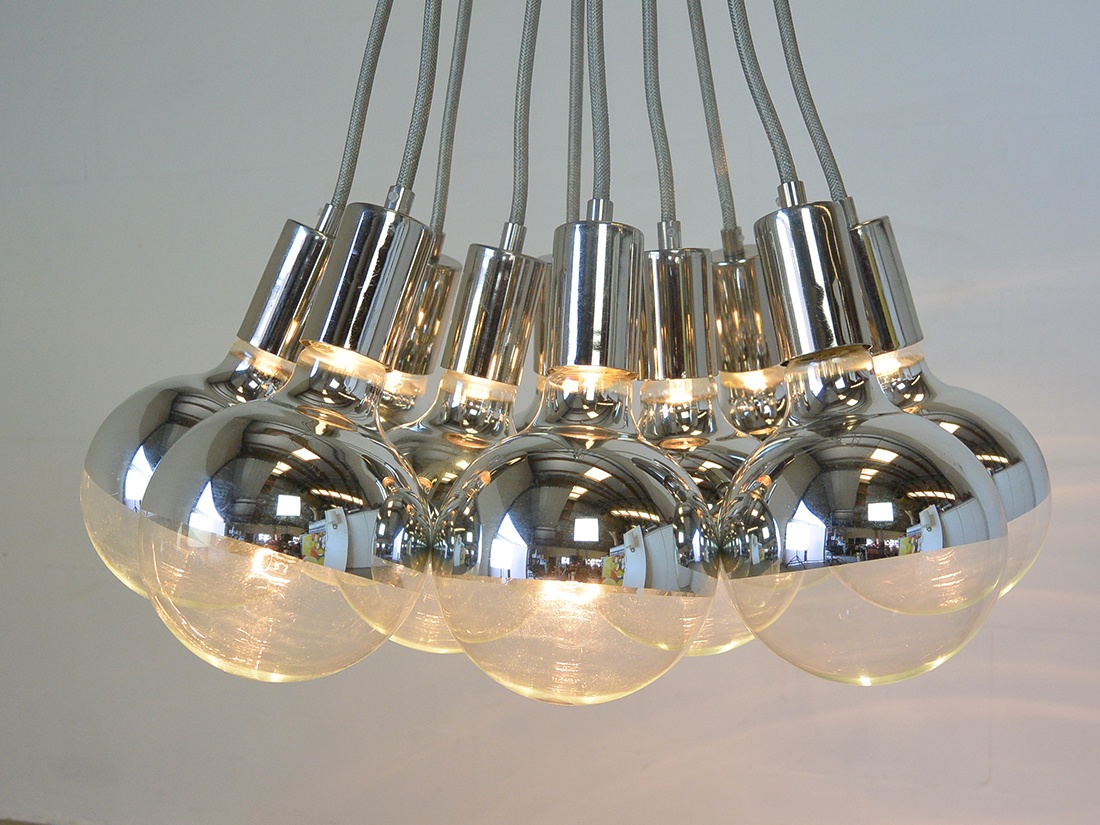 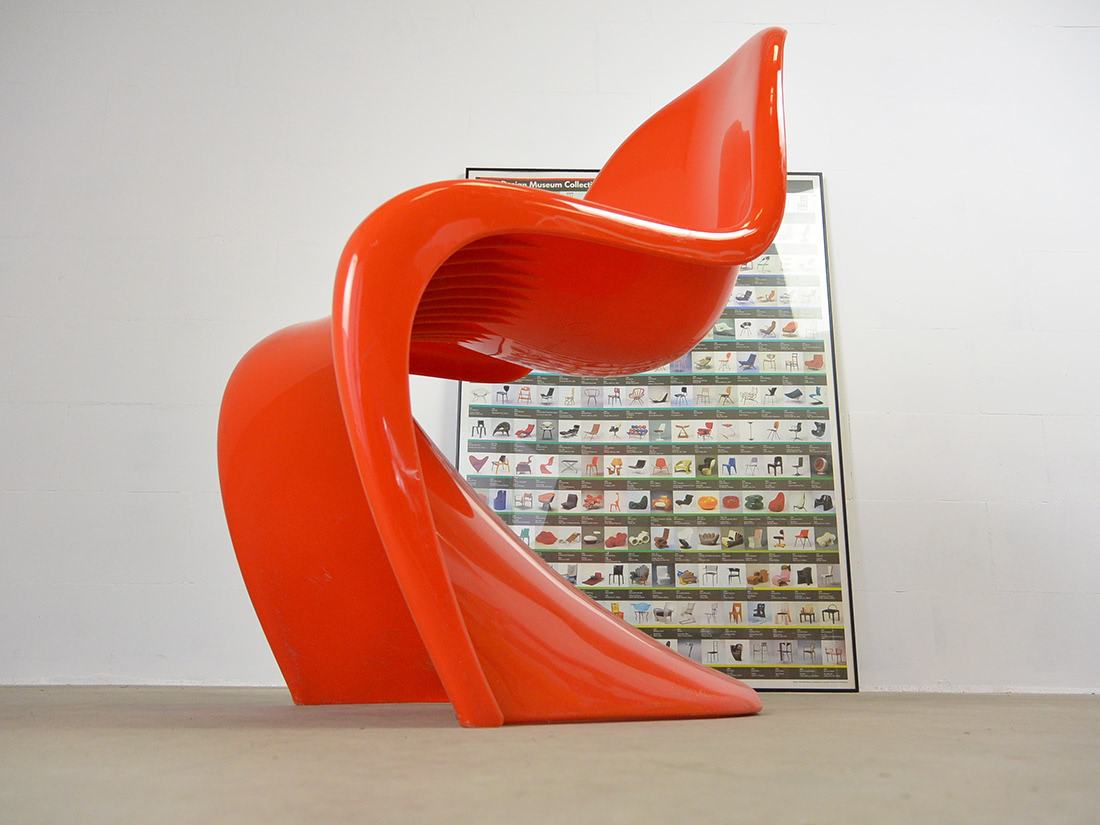